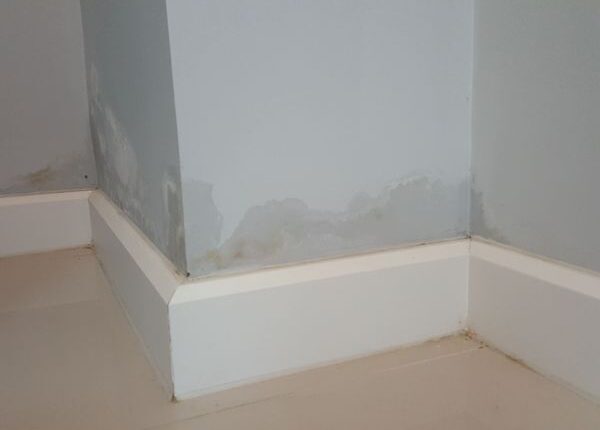 Finding damp and mould on your walls, ceiling, furniture or furnishing can be a shock. The first thing to keep in mind is that it could happen to anyone!

Moisture is the root cause of these issues and can come from a diverse range of things, including tiny cracks on external structures, excessive condensation and ventilation issues. Black mould spores can invade your home from open doorways, windows, vents or your heating system!

This whole issue is particularly common in Britain, due to our climate. According to official Government statistics, in 2019 around 3% of homes in England had damp in at least one property wall. Which equates to many hundreds of thousands of households, living with damp and sleeping in a room with mould.

Of course, the figure is likely to be much higher, due to unreported incidents.

Mould is also common in Britain’s residential properties. Usually, you can smell or see it, but in the early stages, it can grow undetected wherever moisture gathers. Including around small breaches in your roof, windows and pipes, but also wherever you store paper products, around ceiling tiles and on wooden items. It can even spread on wallpaper, insulation materials, carpet, fabric, and upholstery!

Your first thought may be that having damp patches or mould in your home is simply a matter of aesthetics. Perhaps you can just paint over the ugly evidence? However, you must get rid of it properly, and permanently.

This article explains the health risks of damp and mould. It will also explore the best treatment options and tips on preventing mould and damp from appearing in the first place!

Will mould go away if you remove moisture?

To get a foothold within your home interior, mould spores need moisture. That also helps them to grow – and spread. It stands to reason that taking steps to reduce moisture will prevent mould from appearing.

The biggest issue is often condensation. This is the moisture that settles on surfaces (especially ceilings and walls) as a result of steam from things such as cooking, showering and having clothes drying on or near radiators.

You could stop this sort of moisture from forming in a few simple ways. Such as:

Of course, not all moisture originates this way. You also need to have your property inspected for small breaches in structures, which could be allowing damp to become a breeding ground for mould spores.

Keep in mind too that greatly reducing the moisture level in your home’s interior needs to go along with treatments that work in dealing with existing mould invasions.

How do you get rid of mould on walls permanently?

A big misconception about tackling mould is that you can bleach it off. In fact, once it gains a foothold, the spores can grow inwards and start to infiltrate the structure, remaining immune to your attempts to clean them off with household products.

The common mould types in British homes need to be treated with specialist products that kill them. This makes professional mould services wise. They bring greater confidence you’ve sorted the mould and also avoid you using potentially hazardous products.

How do you get rid of damp on walls?

Having dealt with visible signs of mould, your next question may be how to remove evidence of damp on walls.

The first step to getting rid of it is to track down the source. Such as leaking pipes or window frames, or places where condensation pools. Are your bricks porous, and could damp be coming in from soil against an outside wall?

Once you eradicate the problem, you need professional help to get rid of damp. Experts use products, equipment and skills to dry out the area and advise you on any building work needed to repair damage caused by moisture.

This is especially true with ‘rising damp’. As the name implies, its moisture creeping upwards through walls and other structures, potentially making them unstable. Treatments such a damp proofing are best left to specialists, especially if you want to prevent it coming back, or travelling further.

Does putting the heating on help damp?

There’s a myth that having heating high prevents damp from forming inside your home. In fact, this can produce more condensation! The important things are proper ventilation, reducing moisture in your environment and getting professional help to address existing issues thoroughly.

If you want an effective way to eliminate and prevent moulds and damp, you need to ask a specialist about infrared heating systems.

Will a dehumidifier get rid of damp?

Apart from the above equipment to deal with damp, another ingenious invention is a dehumidifier.

There are areas of your home where moisture is inevitable, such as utility rooms and bathrooms. Having a dehumidifier handy means you can strip the moisture from the air, reducing the risk of condensation and the growth of mould and mildew.

What causes damp in bedrooms?

It’s easy to see why damp forms in kitchens and bathrooms, but you often experience excessive moisture in bedrooms too.

It tends to be one of the warmest rooms in the house, and for several hours a day you breathe out moisture as you sleep. When this hits a colder surface – like a mirror, windowpane or remote wall area away from the heat source – the airborne droplets settle and pool.

Damp and mould as you sleep can be especially bad for your health!

Can damp and mould affect my health?

It’s important to deal with damp and mould quickly and decisively. It’s not simply about an unsightly mess, bad smell or potential structural damage.

Living in damp environments – especially with mould spores in the air – can seriously affect your respiratory health. Making you vulnerable to infections, allergies and asthma. You can even get rashes and other allergic reactions from touching moulds, and transferring them to your skin.

As children and babies are particularly at risk from these health problems, it’s vital that you take steps to remove moisture, damp and mould from wherever they live.

Where to get help with household mould and damp?

You can always count on Damp and Mould Solutions to get to you fast and get the job done right the first time. We use state-of-the-art diagnostic equipment to find the source of your damp and mould problems and fix them fast.

You can always count on Damp and Mould Solutions to get to you fast and get the job done right the first time. We use state-of-the-art diagnostic equipment in a damp survey to find the source of your damp and mould problems and fix them fast.